Dilma Rodríguez, GAPP project participant among her hens in the municipality of Tambla, Honduras.

The design of any project needs to respond to local realities. It should be designed to meet the needs of the men and women who are meant to participate in and benefit from its activities. To achieve this, the initial design phase often consists of a range of analyses and assessments that help guide the development of the theory of change, a results framework, and the interventions.

The activities described below have the goal of providing you with the information about how to develop a gender equality agenda, identify partners, and to begin to develop advocacy and capacity building strategies. The activities focus on understanding:

The context analysis is an iterative process and the activities described below can happen concurrently. Information from each activity contributes to refining the project’s focus and the institutions that will be part of the project.

Gender Analysis is a methodology that both:

Purpose: To develop a gender equality agenda around which women and men can advocate.

Conducting a gender analysis is an essential feature of any project that aims reduce gender inequalities. A gender analysis is used to either develop project objectives or to make clear how information about gender roles and relations, and gender-based constraints, relates to project objectives. For a policy-focused project, the gender analysis can be used to develop an advocacy agenda, defining the goals and objectives of the collective action efforts. The gender equality agenda needs to align with women’s interests and therefore needs to be conducted in a consultative, and ideally participatory, manner.

The gender analysis should be used to also understand the differences among men and women, and help to define a targeting strategy. For example, it should help to identify which men and women will be the target for different workshops. For the work on engaging men, the gender analysis can be used to define different groups of men — spouses, government functionaries and leaders of credit institutions — who should be targeted for activities. The analysis can also inform different mechanisms for reaching these groups.

Purpose: To identify the legal and political basis for your gender equality agenda and the social accountability mechanisms10 that can be leveraged to pursue this agenda.

A gender equality agenda can be developed to meet a range of women’s needs and interests and can seek to reduce the gender gaps in access to goods and services such as access to credit or healthcare services, improving the well-being of men and women and by addressing gender-based violence. The purpose of the review of the existing legal framework is to understand the laws or policies that can be called upon to support your gender equality agenda in the country or region in which you are working. These can be national or international laws. Some countries have gender equality laws where this information can be found, although there may be other laws that support gender equality objectives. For countries that have ratified or acceded the CEDAW, consulting the most recent country reports can be useful to understand the strengths and weaknesses of particular national legal frameworks.

At the same time, this analysis should seek to understand the opportunities that exist for civil society to engage with public sector actors. These can include a range of consultative processes and social accountability mechanisms: participatory budgeting, town hall meetings, citizen monitoring or public hearings. Identifying these mechanisms provide legitimate spaces and channels through which women and women’s groups can lobby and influence public sector actors.

In the GAPP project, three laws in particular framed the design of the project. To support the goal of increasing women’s access to productive resources, the GAPP project responded to:

More importantly, the GAPP project took advantage of the Law of Municipalities which laid out specific provisions for civil society engagement and provided a financial goal around which women could mobilize.

There is often a gap between policy and practice, and notoriously so for gender-related policies and laws. This often means that well-developed gender equality frameworks are underfunded, making implementation difficult or impossible.

Identifying opportunities, like the ones presented by the Law of Municipalities, is a necessary and critical step to being able to move a gender equality agenda forward.

Map and Identify the Institutional Actors in the Targeted Area.

Purpose: To identify the potential partners and allies among existing civil society and public sector actors with whom the project should work.

The GAPP Approach has a strong focus on institutional change and collective action. Identifying the locus for collective action and the institutions to whom action will be targeted is an important part of the initial analytical phase. The Approach is not about the creation of new organizations but is focused on the strengthening and reform of existing groups and institutions. Additionally, this mapping exercise can identify organizations that can be important allies for building coalitions and networking.

For the GAPP project, the RMMs were selected as the entities for collective action. The RMMs work well because they bring together women at the community-level and also provide a second-tier organization through which action across the community-based women’s groups can be organized. Being all-women, it also provides a space through which women can learn from and with each other. Where social norms influence how women behave in the presence of men, working with single-sex groups allows women to interact more freely and develop the self-esteem and leadership qualities that make them more effective advocates.

Conduct an Organizational Analysis, Including a Gender Assessment, of the Targeted Institutions.

Purpose: To understand the strengths and weaknesses of the targeted institutions and the gender dynamics within them.

Once the gender equality agenda has been developed and the institutional actors identified, the next step is to conduct an analysis of those institutions. The information that emerges from these analyses can be used in different ways depending on the institution. The GAPP project conducted analyses of the RMMs and of the ICRs which are described below. Links are provided to the tool used for the analysis of the RMM and the final reports for both of these analyses.

When the analyses were completed, the GAPP team reviewed the findings of the analyses with the members of the RMM and of the ICR. This process served first to validate the findings, and second, to motivate the members of both organizations to work towards changing internal rules and regulations of the organizations. It generated a discussion among the members, particularly in the ICR, about gender relations, which catalyzed the mainstreaming process and laid the groundwork for the development of the gender equality policy.

ASONOG used a qualitative participatory approach to conduct the RMM assessment. A workshop was held with members of each RMM where they were introduced to the needs assessment questionnaire (See Needs Assessment Questionnaire). In pairs, women worked together to rate the organization’s performance in six (6) key areas against a five-point scale (Box 3). The scale used the image of a growing tree to suggest early to late stages of development of capacity (Figure 6). The group then came together to discuss and agree upon a final score for each area. The questionnaire includes questions that assess the knowledge about and perceptions of the RMM by women members.

The analysis of the RMM was used to develop the capacity building program on women’s leadership (See Capacity Building Proposal Women’s Leadership) and also to highlight where targeted technical assistance could be provided to strengthen the Network’s operations. In the latter case, ASONOG worked with the RMMs to develop strategic plans and improve their internal operational guidelines.

The assessment of the ICR (See ICR Assessment), like of the RMM, was qualitative and aimed at developing capacity building strategy for strengthening the institutions’ gender equality policies. The assessment process included interviews and workshops with leaders from the 60 ICRs targeted for the project. A qualitative methodology was used to gather information about and understand the effectiveness of policies and practices in support of gender equality. Leaders of the ICRs were asked about the process for decision-making, how members qualify for financial services, the opportunities and constraints for men and women to participate in and benefit from services and the operations and financial sustainability of the institution.

The assessment process identified a number of weaknesses at the institutional level, with respect to administrative and financial operations and sustainability were identified. The proposal (See Capacity Building Proposal ICR) that emerged with respect to gender equality recommended that a gender equality policy be developed with each of the ICRs and that efforts be made to increase women’s access to both financial and non-financial services.

The Candelaria Municipal Network on Women 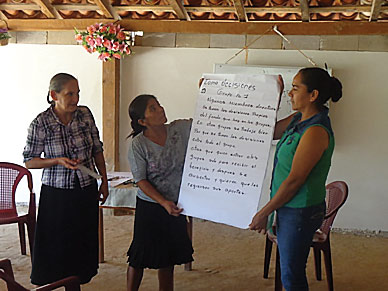 The Candelaria Municipal Network on Women is made up of 32 community-based women’s groups in the municipality. The Network’s mission is to develop the capacities of women in the municipality to develop economic, social, and political independence to pursue a better life, free from violence. The Network was organized in 2003 with the help of ASONOG, a local NGO, which has also delivered workshops to develop women’s self-esteem and leadership, and knowledge of the laws around gender equality and reducing violence against women.

The organizational capacity of the Network has increased over time. The Network has more than doubled its membership from 180 women in 2003 to over 400 in 2016. It has established bylaws and developed a 2013 – 2018 Strategic Plan to guide its activities. Challenges remain however, including the need to develop women’s skills to assume decision-making positions at the municipal level.